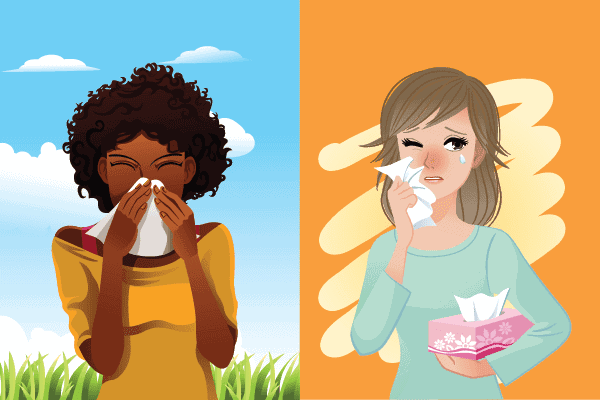 The Difference Between Sinusitis & Allergies

Is it Allergies or Sinusitis?

When you are suffering from sinus symptoms it can be difficult to know exactly what is going on with your body. You know that something doesn’t feel the way it should, and you have a good understanding of when it’s more serious than a standard cold, but knowing exactly what is causing your symptoms can be hard to pin down.

Arizona was once a top recommendation for those who had bad allergies, but as our population increased so did the number of allergen-producing plants and animals. With almost year-round growing conditions, allergy season is always right around the corner if it’s not already here.

They say that understanding is half the battle, and that couldn’t be truer concerning illnesses like allergic rhinitis and sinusitis. Identifying the root cause of your troubles is necessary before you can begin treating the sickness instead of just managing your symptoms. The symptoms of allergies and sinusitis are quite similar, but there are some important differences in what triggers them and how you can treat your problem.

First, let’s go over the basics of how your sinuses function so that you may better understand the problems you’re facing.

The Basics of Sinuses

Your sinuses work in conjunction with your nasal cavities to filter the air you breathe. They drain into your throat, rerouting bacteria from your lungs into your stomach, which is much more capable of dealing with them. Your sinuses perform this duty with the help of a mucosa coating filled with air scrubbers called cilia that pull mucus and dirt from the sinuses, through the nasal cavity, and into the back of the throat (so you can swallow it and your digestive system takes care of the rest).

This process is happening every time you take in a breath and you generate about one quart of mucus each day to help keep your sinuses clear. The mucosa also does the job of humidifying, warming, and purifying the air you breathe to keep you nice and healthy.

This entire system works vigorously night and day to keep you in tip-top shape. However, there are times when the system breaks down and that’s when you realize just how great it is when it’s working properly.

There are many things that can cause your sinuses to begin acting up. Some of these include:

There are also anatomical factors that can make your sinuses more susceptible to nasal conditions; factors such as having a narrow nasal passage, nasal polyps, thin sinus channels, turbinate hypertrophy, or a deviated septum. As you can tell by now, your sinuses are powerful, yet delicate and can be prone to infection and sinusitis.

Most often, inflammation is the primary byproduct and contributing factor to your sinus issues. When bacteria or viruses become trapped in your sinuses they can begin reproducing, then pus and inflammation set in, turning into a sinus infection (also called sinusitis). While present, the bacteria or virus can wreak all sorts of havoc inside your nasal cavities, sinuses, and throat.

Sinusitis is what you have when your sinuses are infected, and the natural drainage of mucus is prevented by the infection and resulting inflammation. Acute sinusitis is a sudden onset of infection and is typically treated by removing the blockage to allow the normal function to return. This can be accomplished by taking antihistamines and decongestants, which aid in reducing the inflammation while decreasing the production of excess fluids that only serve to continue blocking airflow.

Chronic sinusitis, on the other hand, usually requires a more long-term medical approach to relieve your symptoms and prevent the issue from returning. Treatment for chronic allergic sinusitis normally involves prescriptions taken regularly as part of an allergy control program to help your passages remain clear. These helpful medicines can be taken as sublingual drops or as regularly administered shots. There are times when surgery may be necessary due to anatomical issues and in severe cases, but surgery is generally recommended only as a last resort.

The Role of Allergens

Things you are allergic to can cause all sorts of reactions in your body, but the primary reaction is inflammatory. Arizona allergies can be particularly nasty especially in combination with our dry air. Your body’s inflammatory response can result in mucus deposits becoming stagnant and promoting bacterial or viral growth inside your sinuses. This can cause many issues for you if it goes untreated.

It’s important to know whether you have allergies or not and specifically what you are allergic to. This is where allergy testing plays an important role. Knowing what you’re allergic to will help you find the right medicine (for herbal remedies, read here), and can also help you avoid irritants in the future. Discovering the specific allergens or dander that causes you trouble plays a pivotal role in treating and preventing further sinus damage and irritation.

So, Is it Allergic rhinitis or Sinusitis?

Allergies and sinusitis have a lot of similar symptoms, but there are some that tend to be more indicative of one over the other. Allergies are usually triggered by seasonal pollens or encounters with dander from animals that you are allergic to, so you may notice issues ramping up during specific times of the year, after certain weather patterns, or after spending time with animals to which you aren’t accustomed.

Allergy symptoms typically include runny nose, sneezing, watery or itchy eyes, and sometimes difficulty breathing. Getting tested for allergies will help you narrow down the possibilities and perhaps provide you with a list of things to avoid so that you can prevent allergic reactions.

Sinusitis, on the other hand, generally presents with some (or all) of the following symptoms:

If you have cold symptoms like these that last more than a few days, you may be experiencing sinusitis and should see a doctor find out for sure what’s going on inside your body.

Are you experiencing any of these rhinitis or sinusitis symptoms? Please give us a call at 480-567-7098 or schedule an appointment today so we can get you feeling good again.